An Introduction to Risus

July 18, 2020
While roaming the internet in the late nineties/early noughties, I came across a TTRPG that was rules-lite and called itself “the anything RPG.” Want to play a high school cheerleader/samurai-in-training part-time goth enthusiast fast food cashier? The hot pink stick figure art glared back at me. Nah, not interested. But I was wrong. The stick figures were actually purple, and Risus is a surprisingly versatile, handy and down right fun TTRPG. I wouldn’t figure that out though till I discovered it again several years later. Even though it was written as a comedy system (and somewhat lighthearted response to GURPS) you really can use it for just about anything: space opera, high fantasy, pulp, vampires,western, any movie setting you could think of...seriously anything. You can read a far more detailed and interesting history in a number of other places should it strike your fancy. It is time for your Risus indoctrination introduction. 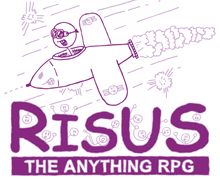 Risus really is versatile and fairly easy to learn. You can play a High School Cheerleader/Samurai in training/part-time goth enthusiast/fast food cashier if that is what tickles your fancy. You can be anything you and your Gamemaster agree on. As for learning the rules, go grab a manual from your favorite standard RPG system. Go on, I’ll wait. How many pages is it? I can tell you the latest Dungeons and Dragons Player’s Handbook is 316 pages. Risus is 6 (or sometimes only 4 depending on the version. There is even a pocket edition) The whole system also includes tons of examples and options. Please don’t get me wrong, I love the latest edition of D&D (5th), but Risus is mostly easier to learn. I say it is “mostly easier” because it leaves a lot of choices open to both you and your Gamemaster. While one might describe Risus as “low-crunch,” in actual play, the required thinking power switches from having a large, memorized, ruleset to having to make a large amount of decisions and agreements. However, it is simple and there is a supportive community and an abundance of free supplements and resources. 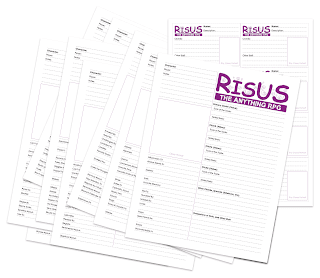 Risus is a system based on cliches. High school cheerleader, samurai-in-training, part-time goth enthusiast, fast food cashier: these are all cliched characters that bring a similar image to mind for everyone. In Risus, you assign a number to each of these (1-4 with a max of 10 points) that represent the amount of six sided dice you use for each in challenges. Again, you can read a lot more about Risus cliches on various sites if you’re starting to get interested. Let us take it simply though. How about a: Nomadic Barbarian From the Hills (4), Spear and Net Expert (3), Rustic Trail Cook and Wolf Butcher (2), Cave Painting Blood Artist (1). You know a lot about that character from his stats. You know where he is from and how he and his people live (nomadic, in the hills), how he fights (with spear and net), what he eats and who likely cooks it (wolves and himself), and that he likes to dabble in art (and also his canvas and preferred medium). Great, right? This is the strength of Risus… and one of its pitfalls.

Let’s make a Hobbit Bard and assign stats. You jot down your own real quick while I do mine. Meet back in five minutes. What’s yours like? Whatever it is, it’s likely very different from the one I created. Did you use Hobbit Bard as one of your cliches? Maybe, maybe not (I did not.) What does Hobbit Bard mean to you and what can it do? Coming to that agreement is an important step between the GM and the player. Otherwise, you might end up being confused during gameplay, when you think your character can eat seven meals in a day with little issue, but your GM doesn’t agree. You can also end up with a lot of Almost a God (4). What would Almost a God mean? Again, it’s up to the GM and the player. It’s possible they want to do a campaign of demi-gods, but they need to decide what that would mean. Risus is meant for fun - not arguments. Let’s take a look at what I came up with.

Here is my Bard: 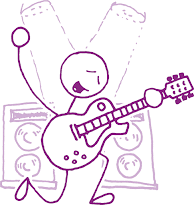 I decided to split my points between 3 cliches, but it is still limited to 10 points. Looking at the main cliche, Lute Playing Swashbuckler, What does it even mean? To me it breaks down to: Epic Lute Riffs, Swinging from Ropes One-handed, Rapier Fighter. You might have thought something very different, but likely similar in at least some respects. Getting to a common understanding is the important part, and once you are able to do just that the fun abounds. You can maybe come to an agreement that the lute playing is just average (until Bagsy gains more experience) and set off on your first adventure. Possibly to find a better Tool of the Trade Lute. 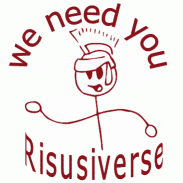 The really great thing, if I haven’t bashed you over the head made you realize it yet, is that you can play it any place, at any time. The pocket edition comes in handy, and the PDF takes up very  little space on any device. You only need a pencil, a sheet of paper, and some way to roll a six-sided die. (And your copy of Risus.) Next time your regular TTRPG night fails due to attendance, maybe you could give this a chance. You should be able to get a game going fast, even with people who aren’t used to TTRPGs. For more reading, you can find: the creator, S. John Ross on Twitter, the highly recommended Risusiverse, the Risus Subreddit, as well as many other places. You can find your own copy as well as many supplementary materials at DrivethruRPG. I’ll leave the adventure of digging through these places up to you.

Which leads me to why I wrote all of this. I’ve had it in my mind for a long time to play in a world in the style of ReBoot and Wreck-It-Ralph. Others have tried it with different systems, some existing and some homebrew. I’ve been aiming to use Risus for it. It’s been several years of tinkering on-and-off and receiving feedback. If I’ve got your interest, keep checking back and you’ll find the occasional post on my ideas and character designs for this setting, which I call Risus Arcade. 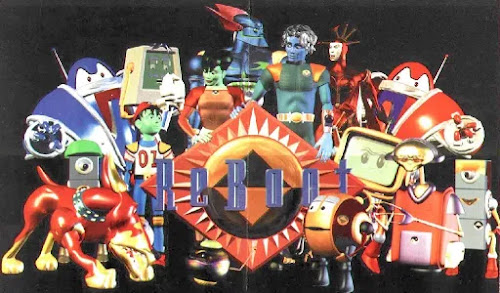