"I don't like the idea of giant spiders and flies," my 8 year old worried at me. My response,"who said anything about ‘giant’?," was of little comfort. He didn't believe me. I had just read him the title to the Eighth chapter of The Hobbit as a preview before ending our pre-bedtime reading session. Thorin and Company were about to enter the bleak forest of Mirkwood, and I knew giant spiders were on the way and somehow... so did my son. I don't know if he'd picked it up through pop culture, an educated guess, or if I'd mentioned it at some point and forgotten. The giant spiders were coming though, and I couldn't stop it. Or could I? 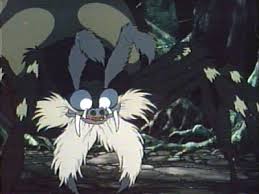 I've already caused him some fitful sleep with the scenes between Gollum and Bilbo. Would the encounter with the spiders be the same? Would it start some deep-seated fear of spiders that might keep him up at night or harm him for years to come? As a kid around his age, I certainly had an irrational fear of snakes. (As opposed to the totally rational and healthy fear of snakes I have as an adult.) I blame this in no small part to a certain scene or two in Raiders of the Lost Ark. Why did it have to be snakes? My son, on the other hand, recently saw Raiders for the first time with (seemingly) no ill effects. It is possible the spiders won't bother him at all. From his comment though, I already sensed some apprehension. 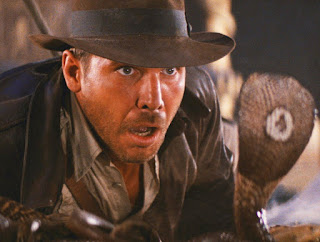 Part of my son's distaste, and subsequent restlessness involving Gollum may have been due to my portrayal. I made sure to utilize a creepy voice and some slight mannerisms. I didn't think it would hurt his sleep, but it bothered him enough that he mentioned it to his mom. I hadn't planned on doing creepy spider voices, but I had been attempting voices for every new character. I think it might be a good idea if this time I kept it flat. It won’t be as enjoyable (for me at least), but maybe slightly less scary for my son.

I could stop the spider from coming. Protect my son from any psychological damage and do my best to remove the arachnids altogether. I could skip parts of the upcoming scenes. Cut out a few paragraphs, Bilbo cuts a few dwarves down, and suddenly we're on to the Elves. I had covered my son's eyes twice to avoid some slightly graphic bits of Raiders (not the snakes), and wouldn't this tactic be similar in premise? However, it would cut a good bit of Blibo's rise to heroism, and I wouldn't want to do that. I'm also not good at cutting out text “on the fly,” and might miss an important bit or two. I'm looking at you Sting. 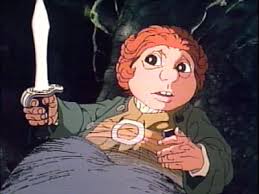 As I consider my potential strategies, keeping the reading flat for this chapter may be the best idea. It won't be as fun for either of us, but it won't be as scary either. Is that really a large price to pay to protect my kid from nightmares or mental scars? I think I may also pull a Princess Bride. "Bilbo doesn't get eaten by the eels spiders at this time."