An Unexpected Ending: My Hobbit Adventure - The Last Stage

July 25, 2020
Good morning, if it is a good morning (to you) when you’re reading this. I certainly hope it’s a morning to be good on. Or at the very least, I wish you a good morning, whatever time you’ve decided to open this post. If you’ve been following along, you’ll know that my son and I last left off our Hobbit adventures as Bilbo, Thorin and Company were escaping the Elf King’s Halls by hiding in some barrels. You can debate as to whether that was the best idea on my previous post. Now, we come to the end of our journey: Smaug. You’re probably saying to yourself right now, “Smaug isn’t the end! Are you crazy?” You’d be right, although I may, indeed, be crazy. The ending is the gathering of the five armies and what happens between Bilbo and the Dwarves. The final resolution in the story before our hero makes his journey home. Think back to your first reading of the book, or perhaps the first time you were with someone as they saw or listened to an adaptation, or maybe as someone listened in excitement while you read it to them for the very first time. Were they expecting the ending to be with the meeting of five armies, or were they anticipating a great battle with a dragon as the finale? 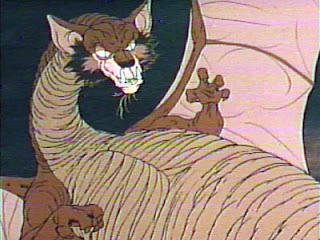 We don’t get Smaug as the story’s finale, but he is very close to it. Doesn’t it feel strange, though, that Smaug isn’t the very ending? We’ve spent a good amount of time experiencing this journey through Bilbo’s point of view. We are constantly headed for that lonely mountain with the golden treasure guarded by a malevolent beast. There is so much worry and anxiety about what they’ll actually do when they get there. It’s even Bilbo’s job to get them in… this is the stated point of their quest! Getting their gold back from Smaug is almost all Thorin and Company talk about, besides having to bring a dratted Hobbit along because of Gandalf. My son certainly wasn’t expecting a few additional chapters detailing the fallout and infighting of all of the people interested in the Red Wyrm’s untimely demise, and I fear he may have lost a bit of interest. Bilbo stayed safe with the Ring, and I think that was all my little hobbit cared about. Were you and yours expecting Smaug to be the ending or something more? Certainly some resolution was needed, but during my first reading as a kid, I doubt I expected the scope of it. 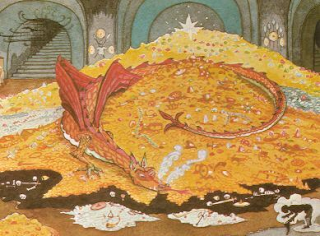 We all probably should have seen it coming. Throughout the journey, the Dwarves continually leave enemies in their wake. They fall into the clutches of the Goblins (Orcs), and barely escape with their lives, not once, but twice, no less! Is it any wonder that the coalition of wolves and Goblins send a whole army, thirsting for revenge, following the death of the Goblin King and an embarrassing defeat by flaming pinecones and a winged escape? Let’s not forget the probable rage the Elf King Thranduil felt as the whole company escaped from under his nose. If the spiders had been more mobile, no doubt they would have joined the fight, too. Then we come to the humans of Laketown. They succored the Dwarves, gave them provisions and help based simply on old half-remembered songs and prophecies. Then the dragon comes and ravages their town, and they’re the ones that have to defeat it? Granted, they couldn’t have done it without the Dwarves’ scouting (really Bilbo), and the help of the birds telling Bard where to shoot. How rightfully cheated they felt, though, when they ended up doing so much of their work, without being offered any of the prize. Were the demands of the Lake-Town residents fair? To the Dwarves (or maybe just Thorin) they were not, but, in the end, the town of Men got their payment and the Dwarves really did pay the price. 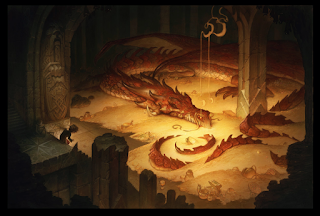 Expected or not, we do end with the five armies battling and Bilbo’s journey home. Within that, we have Bilbo’s betrayal of the Dwarves, yet another rescue from the great Eagles, a gruesome fight, alliances forged, an ascension of leaders, and Thorin’s death. This is so much to cover in a few short chapters, and you barely feel prepared for it, even with the undercurrents woven throughout the book. It was probably too much for an eight-year-old to appreciate.  I think my son was a bit disappointed by the ending, but also pleased that his hero survived to continue the journey another day. I wonder how he’ll feel when we start in on Lord of the Rings one day, and if he’ll make all of the connections between the books without help.

Often after chapters, my son and I would discuss what had happened, how we felt about it, and what we imagined would come next. Which, of course, was mostly him sharing and me being elusive with the answers. Should I ever complete this excursion with my younger son, I think I’d like to incorporate a little more prep work for each chapter’s ending, talk about how the interested parties might be feeling, and what they might do about it. With a little extra discussion, I might better prepare him for the next battle of five armies, instead of having him focused on a dragon that the Dwarves don’t even fight. As we traverse the realm of Middle Earth, my boys and I might learn a little something while we have our fun. At the very least, maybe, once more, I can see the world of Tolkein through the eyes of a child. I’m not sure what I’ll find in doing this, but as we all know, “there is nothing like looking, if you want to find something. You certainly usually find something, if you look, but it is not always quite the something you were after.”

Overall, I think my little eight-year-old Hobbit enjoyed the Hobbit about as much as I could expect. Certainly there were bits that were hard to comprehend, but he now has a solid grounding in the realm of high fantasy, if he didn’t already. I haven’t completely decided yet if I’ll introduce him to the Rankin Bass cartoon of it or the recent movie version. I think the cartoon may be well received, and the three movies are a bit of a long trip for someone so small. As for the Lord of the Rings, and Frodo’s adventures with the Ring? I think we’ll be saving that for another time, perhaps when something Tookish awakes inside of him. Next, I think we’ll enter the world of Narnia instead. Actually, before he returns to Middle-Earth I think we’ll be heading to a number of different realms. Until I speak to you again, dear reader, I say “may the wind under your wings bear you where the sun sails and the moon walks.”
- A 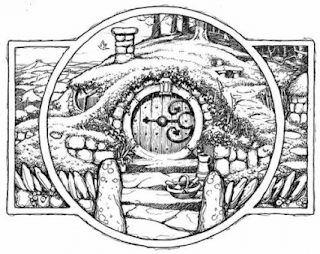 Bugsy's Postscript: Andy's question about how you felt when you first experienced the Battle of the Five Armies was so evocative I couldn't resist abusing my prerogative to be the first to answer it. My first exposure to The Hobbit and Tolkien was the 1977 Rankin Bass film, and while I don't have clear recollections of that first viewing, I do remember the ending being much more affecting for its length and ugliness. Somehow, I knew that this made the story more real, somehow, in a way that others weren't. The deaths of the Dwarves, and particularly Thorin, made an impact on me that I feel to this day - about violence, about greed, and about the way they change people. So, while I didn't understand why the ending of the Hobbit was unique, I wouldn't have changed it for the world.