On an expedition through my attic the other day, searching for something completely different, I came across a treasure. It was Dungeons and Dragons, Supplement 1: Greyhawk (9th printing). What delights might this wondrous pamphlet of a book hold? Certainly, the rules have changed and evolved over the years from 1st Edition to the 5th. We’ve seen the fall of THAC0, wandered the strange road that is 4th Edition, and seen the  3rd turn into 3.5. Can we still pull nuggets of wisdom from an ancestor of the games we love? Absolutely! The following are some thoughts I had while leafing through this 68-page tome of (nearly) forgotten lore. In this post, we’ll stick to the "Men & Magic" section and leave the sections for "Monsters & Treasure" and "Underworld & Wilderness Adventures" to a future post. 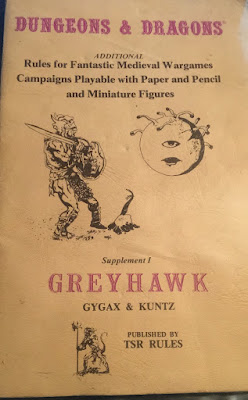 For the Intelligence stat, they’ve included a "% Chance to Know a Given Spell" chart along with the minimum and maximum number of spells a wizard could learn or know per level - primarily for determining what you can cast. This has been simplified in newer editions, opening up a range of available options to the spellcaster. "What about scrolls," you might be saying to yourself. "Those are easy, too.” Or, “I can just use the Arcana skill to figure those out!” And you'd be correct: you could (and can) just use the Arcana skill. But. what if you used... both? Picture this: the wizard in your party unfurls a scroll. "Ah!" they say. The DM has them roll an Arcana check, result: 10 - it's within their abilities, but still foreign. The wizard’s brow furrows. "I can cast this... I think. I’m just not sure what it does." Then comes the % chance. If they fail, the scroll will become something of a mystery, where they spend time deciphering it, maybe a check per day. Perhaps the scribe had used bits of different languages, or their handwriting is archaic, and the reader just needs time to make the contents clear. You might say that this makes scrolls rather limiting, but I'd argue the opposite: players love a mystery. Players also love finding things. You can award a powerful spell at an early level that they can learn or use in the future. Again, our wizard isn’t quite sure what the spell does, or if casting it is even within their reach. They keep studying and making checks, and slowly discern that it's an evocation spell, requiring verbal and somatic components... typically bat guano and sulfur. "Ah," the wizard finally says. "I have a scroll of fireball!" And the DM prepares for a flambéed party. This doesn’t have to be limited to D&D - a gamemaster can provide these chances to any player with a background or specialty in something they're trying to suss out. It opens up opportunities: mysteries for the players and story development for the GM. Besides, who doesn’t want to see that fireball's collateral damage?

Titles are another little thing that the Greyhawk supplement reminded me about. In Bugsy’s post about Paranoia last week, he mentioned how useful titles can be, giving a hook a player can hang onto when they aren’t yet sure of their character. Titles can help the table define who their characters are. Greyhawk reminded me that D&D used to do this by level. A thief starts out as an Apprentice and, with 1,200 experience becomes a Footpad, with 2,400 a Robber, with 4,800 a Burglar, and so on. Of course this progression can get tricky: is a Cutpurse really a better thief than a Burglar? Should the Sharper (more of a conman) really be in the progression? This may be part of the reason they ultimately did away with the whole idea. Seeing the chart did bring me back to the last rouge I played in a game, though. I wrote up a whole Thieves Guild named "the Black Key." If there's interest, you can pester me to post more about it later. One thing I did was give different titles to the various tiers and roles within the organization, as well as assign approximate levels and character types to each - not too dissimilar, conceptually from the Greyhawk chart. The Black Key served a purpose. It gave a framework to my character’s role in society, gave him something to strive for, and gave him direction. You need to create these things in your games. If you’re a player, write up a Guild, club, or organization and ask if your GM can include it (at their discretion). If you're the one running the game, provide your players these opportunities. And, as above, this doesn’t have to be limited to D&D. Assign space officer roles, award promotions in werecreature packs... just keep your characters from becoming "Regular Fighter Number Six."

The last bit of wisdom I gleaned from Greyhawk was found in a little spell called Prismatic Wall. Scintillating with the whirling globe of myriad colors it may be, the spell itself hasn’t changed much all the way up to the most recent edition - there are still several different colors with varying effects. No, the text I’m referring to is actually just a note at the end:

Note: Referees may wish to change the order, negating spell, and/or use & effect of the various colors in order to make it more difficult for their players to break through a Prismatic Wall.

I’m not referring to the use of the term Referee, although that's a definitely a discussion for another time. (Should the term be Dungeon Master? Game Master? Referee? Storyteller? Guide? The list goes on and on.) I’m talking about the part right after that: “may wish to change the order…” I’ve seen similar bits of advice in the new books, and it's not about making things more difficult for the players - it's about making the game more fun for everyone involved. The core job of the Referee, (Dungeon Master, what have you) is to help facilitate fun. Okay, that fun (for everyone) could be in making things more challenging for the players, and I don’t want to tell anyone that their fun is "wrong." But I do think that everyone who takes on the mantle of "Referee" forgets, at some point, that this is really all just about fun. Use the faith your players have put in you as their guide to help you all have fun.

This post, when you boil it down, isn’t really about Greyhawk. It is about seeing our roots in Greyhawk as a reminder. It doesn’t matter if you're one of the players or their guide in the game's world. We all have ways to contribute. Give your worlds mysteries, and give opportunities to solve those mysteries. Give your characters titles, and they'll have a richer world full of things to strive for. Most of all, give everyone the gift of fun. After all, that's what we’re all here for, right? Fun - whatever that may mean to you and your group. Tabletop roleplaying games don’t have to be (and, arguably, shouldn’t be) about winning or losing, but having fun with all the people around the table. So, until the next post, everyone have fun at your table. 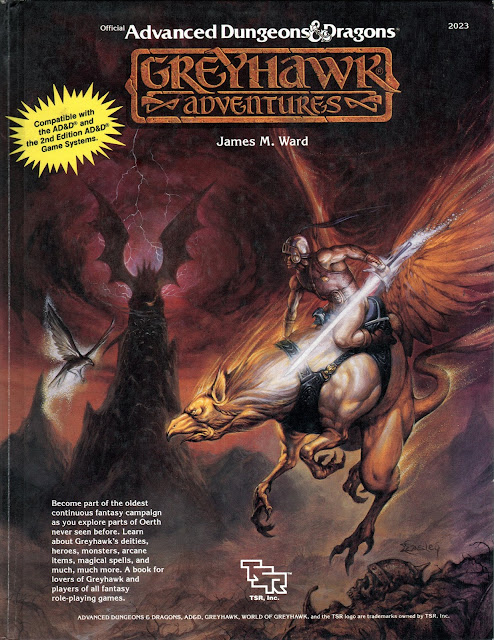