Unclouded by Conscience, Remorse, or Delusions of Morality: Ash and the Face of Corporate Evil

June 20, 2020
Ian Holm's last film role was in 2014's The Hobbit: Battle of the Five Armies but he's made a surprise appearance in the past few months thanks to a meme that popped up with the COVID-19 lockdown referencing 1979's Alien, and one of Holm's most well-known roles. 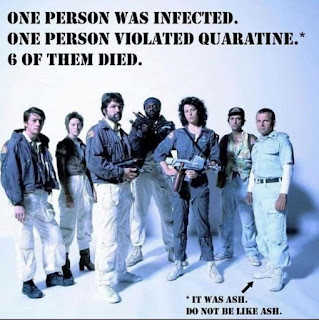 Of course, many (including myself) pointed out that the movie was even more relevant to the current situation than than the meme suggests: Ash brings the infected Kane onto the ship based on secret corporate orders, fully aware of the horror this will result in. Right around the time this meme first appeared, we began to hear calls for immediate "reopening," and that the countless resulting deaths would be a small price to pay for the good of America's corporate elite. Had Alien writer Dan O'Bannon given the character that kind of dialogue, ("The crew are expendable, but consider the good your sacrifice will do the Weyland-Yutani Corporation and its shareholders.") he would have been roundly mocked for writing something so unrealistic and "on-the-nose." 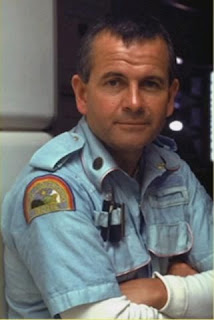 The Company (as it is referred to in the original 1979 film) has two faces on the Nostromo: Mother (the opaque ship's computer) and Ash (although neither the crew nor the audience know this until the film's final act). Besides both being literally inhuman, both share the Company's disregard for the lives of their human resources, but hide behind bureaucratic logic gates or the guise of a friendly crewmate. As has been pointed out numerous times, the "real" monster of Alien is not the Xenomorph, but the equally inhuman corporation seeking to acquire it. And the two faces it wears are ultimately a far more effective portrayal of corporate monsterism than the stock businessman portrayed by Paul Reiser in the sequel. Ash plays his role well, and makes his regular betrayals of the crew subtle enough that they aren't recognized as such until it is far too late. Ash is every supervisor undermining the lives of those who report to him. Ash is the secret shopper, testing employees' ability to stick to the company script. Ash is the "small businessman" propped up every time laws about fair wages and worker safety are proposed. It's not without reason that he openly admits to admiring the "purity" of the Xenomorph and how it doesn't need to hide its disdain for all other forms of life, "unclouded by conscience, remorse, or delusions of morality." Neither he nor the Company are, either, but they still have to fake it for all the necessary interactions with those pesky (and flimsy) humans.

And, of course, the brilliant Sir Ian Holm plays the part perfectly as a meek cog in the ship's machinery, doing his part and making an effort to not stand out - much like his role in 1985's Brazil, where he also played a character that's a small part of a massive, lethal organization. Mr. Kurtzmann, besides playing an actual manager, is at a farther remove from the horror than Ash, but just as dedicated to the smooth flow of operations and policy. 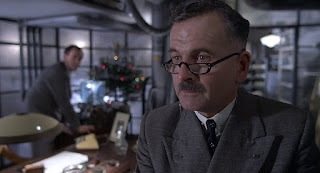 So, the next time you're creating a character to speak on behalf of a massive, remorseless, inhuman entity, think of Ash and the way Sir Ian brought him to (virtual) life. They don't all need to be beancounters or vicious beasts trying to climb the ladder. Sometimes, they appear just like regular people who will stop at nothing to follow their masters' instructions... all other priorities rescinded.