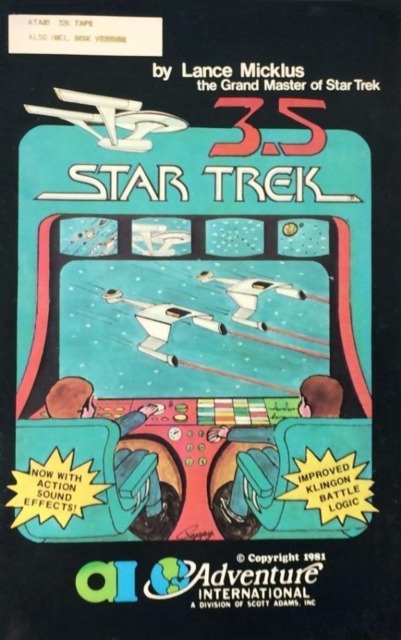 The question "what was your first Star Trek" carries a very different weight today than it did thirty-five years ago. All the classic (i.e., pre-Discovery) series are instantly available across multiple streaming services, and the films aren't much harder to find - they were some of the first shows to be made available via streaming, in fact. And even before then, there were both broadcast and cable reruns, along with physical copies for sale and rental. For today's viewers, the question usually means "which show or movie is the one that 'clicked' for you, that made you want more?" And, from there, we can deduce what they like about the franchise - stylistically, thematically, and tonally, since Star Trek can be a lot of things for a a lot of people.

But it wasn't always this way. For a while, Star Trek was only available sporadically. Even while the movies were doing well at the box office, prospective viewers were at the mercy of whoever made selections at their local video rental places and TV stations. So, besides the new fans discovering Trek through films, people might have come in through novels (both original and adaptations of episodes and films), comics, and, in my case, video games. To be fair, even before the fateful Saturday morning I was going through the collection of disks that came with the Atari 800XL my family had purchased, I had seen some episodes of the animated series on Nickelodeon. But they had made little impression on me, aside from some vague recollection of the visuals and the names "Kirk," "Spock," and "Scotty," so I wasn't expecting anything in particular when I loaded up something called Star Trek III. But for the next few hours, I was transfixed, trying to learn some fairly complex systems and explore a universe that felt far darker and more mysterious than the clearly plotted maps of Star Raiders and Starmaster, one requiring you to venture into the complete unknown. Star Trek had finally got some hooks in me, and it wasn't too much later that we rented The Voyage Home, and the rest, as they say is Earth history.

So... why was the game called "Star Trek III?" When I did eventually see The Search for Spock, it seemed to have little in common with the game's story. At the time, I told myself this must be what the game creators thought the third Star Trek film would be like, and largely put it from my mind as I became obsessed with The Next Generation. But the real story behind this game was went back further and was more complex than I could have imagined at the time. Because Star Trek III  was (in the minds of its creators, anyway) the third iteration in a game series called, confusingly enough... Star Trek, which was almost as old as the series that inspired it, and, perhaps, just as influential. 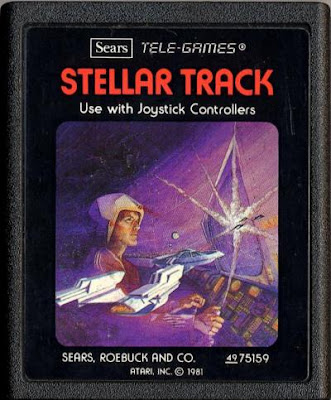 Star Trek (the game) was first created in 1971 by a high school student named Mike Mayfield on stolen time (and punch cards) for the SDS Sigma 7 mainframe, inspired by the earlier game Space War, and of course, Star Trek (the show), which was then just beginning the syndication run that would eventually resurrect the franchise as a world-wide phenomenon. The story of how the game proliferated through college campuses and (eventually) home computers is a fascinating one and I highly encourage reading more about it. Suffice to say, Star Trek (the game) pioneered strategy games and invented the "starship simulator" genre, requiring players to think tactically (in ship-to-ship close combat), strategically (navigating a large galactic map), and resourcefully (having to do all of this with a limited energy supply). Particularly through its next iteration, Super Star Trek (to which my Atari game likely considered itself a successor, hence "Star Trek III," although the packaging itself called it Star Trek 3.5), it would take on countless forms under a wide range of names, and even inspire the aforementioned Star Raiders and Star Master. (Along with some... less creative titles like Stellar Track for the Atari 2600.) Ultimately, though, it's a paradox, its thematic (and unlicensed) inspirational namesake at odds with its fundamental nature: a war game.

War in Star Trek is largely defined by the original series' Cold War origins and by its WWII veteran creators, who (as discussed in one of our Twilight Zone posts) frequently regarded war as a monstrous tragedy to be avoided whenever possible - not to mention the Vietnam War footage being broadcast to show's audience via the news. The specter of nuclear Armageddon lurks behind every scene of tension between the Federation and other powers even into the '90s - war is presented, particularly in  Next Generation, as a disaster to be avoided at all costs. In-universe, most of humanity has been wiped out in one or more nuclear conflicts prior to First Contact, incorporating the creators' experience with the devastation of WWII into the setting's very nature. The "enemy," (as most directly approached in a Next Generation episode titled... "The Enemy") is often portrayed as sympathetic equals who may be misguided by malicious individuals or simply victims of circumstance. As the unnamed Romulan commander says to Kirk in "Balance of Terror," (easily the best episode of the original series, and a major contender for the best in the entire franchise) "you and I are of a kind. In a different reality, I could have called you friend." When war does finally break out in Deep Space Nine, it is as portrayed as bloody and senseless as all the previously-averted wars could have been. While it's debatable how much the "sympathetic equal" standard is applied to the Dominion and its client species, the storyline stays on-point with the franchise's message up to then. 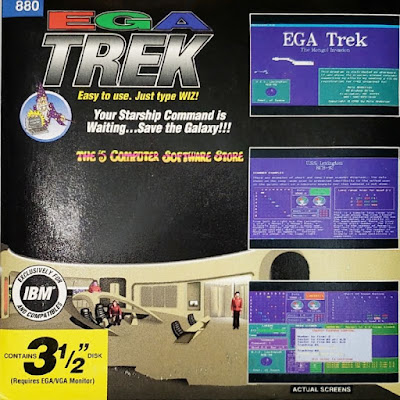 So why, then, are there unabashed war games set in the Star Trek universe? The goal of the 1971 game and its descendants is to find and eliminate all Klingon ships in the region. Far from "seeking out new life and new civilizations," the Enterprise's mission is, quite literally, to "search and destroy," echoing operations taking place in the then-raging Vietnam War. Even at the height of the Dominion War, Starfleet officers would never be given missions like that. And this is far from the only combat-centric Star Trek game - even the first officially-licensed ones were based solely on ship-to-ship combat, and there have been plenty since. A lot of it, of course, stems from from the inherent dramatic tension of battle, when all the characters are working to the best of their abilities in a life-or-death situation. Even though they usually only take up a small amount of running time in any given episode, space battles are exciting and memorable. If someone were to incorporate only a single aspect of Star Trek into a new interactive medium, it would seem obvious players want to shout "damage control" or "fire phasers" instead of, say, improvising card games to befuddle captors or tricking computer after computer into blowing itself up with logic puzzles and/or nursery rhymes, despite the fact that episodes usually hinged on things like that instead of combat. And when stories were resolved through battle, as in "Balance of Terror" or Wrath of Khan, it was about understanding the enemy and thinking beyond what they expect - very much the opposite of war games with a strict set of "moves."

And yet... Star Trek is a lot of things to a lot of people, and it's significant that Star Trek (the game) has been around for nearly as long as Star Trek (the franchise). It is something that people think about when they think about Star Trek... why else would it have the same name? And, like the show, the game would inspire frameworks that allowed creators could try new and different things. That Saturday morning, Star Trek III felt like it had the potential to convey a an entire universe of exploration and wonder. A few years later, I would finally get to play a game like that, called Starflight. It used ideas that went all the way back to that 1971 game, but now there were things to discover in that huge galactic map, and new civilizations to interact with... not just fight. Today we have space games like Mass Effect and No Man's Sky that have the kind of scope everyone playing in the Star Trek universe longed for over the past five decades, with obvious lineage to that one single game. Not to mention that the tabletop war games that inspired Star Trek (the game) would themselves go on to create a wider, more expansive kind of play: the tabletop RPGs we love so much, where players are encouraged to think in new and creative ways, and not just work out the smartest "move" to play. Just like the crew of the starship Enterprise.

If the universe of Star Trek came out of war and destruction, and the need to move beyond that (both on- and off-screen), then it's entirely appropriate that a game focused these things would eventually lead to open tales of excitement and wonder, storytelling where no one has gone before.

Play long and prosper, my friends.