Gaming in a Time of Chaos

For the past few weeks, I’ve struggled with finding the right thing to post on the blog. Between the continuing pandemic looming over our lives, the atrocity of the Capitol Attack, the impeachment proceedings, and the inauguration, these past few weeks have been full of stress. (Okay, maybe you international folks don’t have as much anxiety about the Capitol Attack.) Not to mention all the ongoing systemic racism, voter suppression, and political identity issues in the U.S. If you want to read more about our views on these things, you might want to check out Bugsy’s post from last week -  Limited Imagination: Storytelling and the Politics of Assumed Perspective. I haven’t even touched on my own personal problems with the household plumbing yet. This goes to show one thing, though: our lives are full of drama. So, what's wrong with all this drama? Plenty, but there will always drama in our lives, from ongoing political issues to stressful home repairs. Tabletop games tend to thrive on drama and use it as a source of adventure. Can’t we use some of these same issues, national or personal, for the gaming table? Why of course we can!  The stories told in TTRPGs, like any other expressive artform, are often a reflection of our own worlds and lives. We can take bits of those, and use them to inspire us at the tabletop.

Political issues can be at the center of a campaign, or serve as a backdrop for the players to act around. The second campaign of Critical Role has this in droves, with different factions in a single nation, war, truces, treaties, international politics - it is steeped with it. The players are provided a multitude of opportunities, and the level of their involvement varies. The current campaign from High Rollers features political interaction as well. Both streams address various degrees of racism, depending on the adventure setting and player involvement. These respectable Dungeon Masters didn’t incorporate these themes because it was easy - using these challenges gives us, as players, a chance to confront these issues head-on in an environment of safety. And what better way than to learn from those experiences than at a tabletop amongst friends? Players can choose to sway the course of a nation or watch the status quo fall to a new regime. If you’re looking for examples, the second campaigns of both of the aforementioned Twitch streams are good places to start.

Other stressful issues we see in our daily lives might seem too mundane to include in a tabletop game... at first glance. Plumbing problems? Ants or mice in the kitchen? The modern conveniences of air conditioning or heating on the fritz? These may not seem to convert directly to fun adventures for your players, but think back - how many of you have started playing a game (tabletop or other) and one of your first quests/missions was to handle a rat infestation? This is a common trope in fantasy games, and it's likely that many of you have run into it more than once. I know I have quite a few times over the years. It's not unlike having mice in your kitchen at home, but you get to take a more active approach to their removal. At the very least, you don’t need to physically deal with the aftermath yourself. Want to put a different spin on that? Next time, use the same stats as the Rats, but make them Large Ants. Sure, you may still be close to an established trope, but it'll certainly be a memorable change from the same old tired clichés. Plumbing problems? Well, something has to cause that backup at a local outhouse - giant spiders? Inverted quantum coupler with the polarity reversed? Both are challenges your team of players could take on, with some other fun difficulties thrown in. The issue of not having air conditioning seems difficult to translate to a game, but I bet you could convince your players to go hunting for the local weather shaman that's gone missing, or take on Fire Lizards/elementals that are harassing the town. The point is, you can take your issues, change them up, and include them in a game. If you’re not sure where to go, take a common trope challenge and put your own personal spin on it. Your tabletop and your life will be better for it. 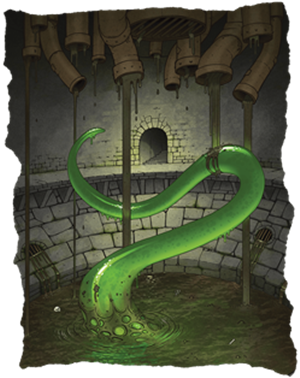 Tabletop roleplaying games are an activity many of us use to de-stress or escape. We leave the challenges of our daily lives behind to take on dragons or space wizards. However, it can also offer us an opportunity to take action where we might feel powerless or roadblocked. We can find inspiration in the mundane for our fantasy worlds. We can have our storytelling art imitate life, and improve our lives because of it. Perhaps, if we find the solutions in our made-up adventures, they might open an avenue into resolving our problems in the real world. To quote Oscar Wilde - “Things are because we see them, and what we see, and how we see it, depends on the arts that have influenced us.” The next time you’re facing a challenge, the answer may be in art, perhaps even in a roleplaying game.