Limited Imagination: Storytelling and the Politics of Assumed Perspective

"The artist must take sides. He must elect to fight for freedom or slavery. I have made my choice. I had no alternative. The history of the capitalist era is characterized by the degradation of my people."

- Paul Robeson, Speech in Support of the Spanish Republic (1937) 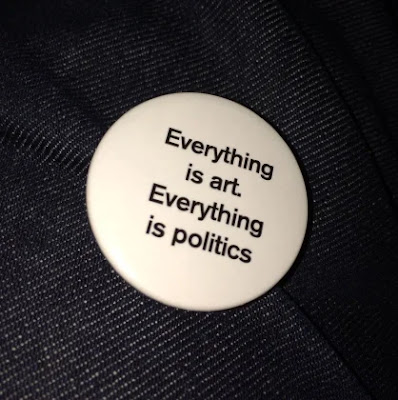 The fact that the modern reactionary surge initially coalesced around an angry reaction to video games (and, significantly, how those games are criticized) might be seen as a darkly comedic indictment of our society. "I can't believe that history books will have to start this chapter with something as stupid as 'Gamergate'," goes the refrain, both presuming electronic gaming to be of lesser cultural value and ignoring the history of reactionary elements targeting new media and the voices it elevates. Comparisons between angry internet rants and Nazi attacks on impressionism and Jazz feel much less hyperbolic following the events of January 6. I've even seen "degenerate," the Nazis' favorite term for art they didn't like, used to describe works that portray (or worse, show the world the eyes of) people with a different lived experience than "white, cisgender, and male." The events at the Capitol show an unfortunately predictable endpoint of a presumed narrative default: the story wasn't going the way they wanted it to, and since everything is about them, it must be wrong. We can see parallels in the way fan communities have insisted that there are "lost" episodes of Sherlock or Supernatural when they're dissatisfied with the resolution of ongoing storylines. Elizabeth, who was not ready for the Revolution, legitimately expected to win simply by taking part because that's the way she expected her story to go. (And the fact that she's been incorporated into the theme song for Animaniacs, a series very much about subverting narrative expectations, feels entirely appropriate.)

Of course, none of this happened in a vacuum. The alternate narrative reality of the "right-wing media sphere" was built on an existing hegemonic cultural foundation that assumes a specific audience. Most popular sci-fi and fantasy works, for example, still carry the DNA of the colonialist nineteenth century adventure stories from which they are descended. The standard expectation of "stories about white characters for white audiences" usually remains in place until challenged. Progress has certainly been made over the years, but usually in the tiniest of steps, and in the face of deep resentment from the audience that's no longer being solely catered to. This has been the case for the past hundred years, but the aforementioned right-wing media has amplified these complaints as never before, often as callous clickbait, but also to support an underlying agenda. For the first time, these complaints were getting treated as real news.

This isn't to discount the BIPOC and queer creators and audiences who have been here the whole time, and that same explosion in media availability has made content by diverse creators available to audiences that might not have otherwise been able to experience it. And Western audiences are getting more and more chances to see and read media from around the world than ever before. As depictions become more diverse, the previously defaulted audience might, for the first time, have to do what everyone else has always had to do, and follow characters from backgrounds different than their own. And, as the saying goes, equality looks like tyranny from a position of privilege.

Ironically, given the centuries of exploitative policies required for them to have this pandering, proponents of non-diverse media will often refer to it as "apolitical." In other words, their views are the de facto norm, unquestioned, not even seen as "views" at all. The participation of anyone outside of their myopic circle is, by nature of defying this myopic concept of "normality," a political act - diverse creators are "bringing politics" into their work simply by taking part. And those furious about wider participation would soon be politically mobilized themselves  - one of the biggest drivers in Gamergate was Steve Bannon, after all, and the alt-right were able to swell their numbers through this open exploitation of white grievance, this presumption of narrative centrality.

All of this is, ultimately, missing the point of narrative media entirely, which is fundamentally about experiencing the world from the view of someone else. By insisting on characters identical to themselves, these audiences are limiting the possibilities of the media they're consuming, and with it, all the ideas and experiences other viewpoints can bring. To me, the connection between a work and an audience is one of the most beautiful and magical achievements of our species, so hobbling its potential in this way feels blasphemous, and, the insurrectionists view of themselves as righteous heroes shows, dangerous as well.