Control and the Alternate Reality of the Workplace

This week, PlayStation Plus subscribers got access to one of my favorite recent games of recent years: Remedy Entertainment’s Control With its fusion of cosmic horror and comedic bureaucracy (not to mention "what if gunfight... but with Jedi powers?"gameplay) this is a game that might have been custom-made just for me. Control takes the tired “secret government organization overseeing the paranormal” trope and shifts the focus towards the first part, presenting the headquarters of the titular Federal Bureau of Control (known as the “Oldest House”) as a Brutalist maze of filing cabinets, typewriters, water coolers… and twisted hallways folding in on themselves, a Ritual Department, and a power system that may be running off an imprisoned elder god. It’s a setting defined by contrasts, blending the dull familiarity of the recent past with the nightmarish and otherworldly. But what’s really unique is the care the designers took to make the Oldest House feel like place people actually work. 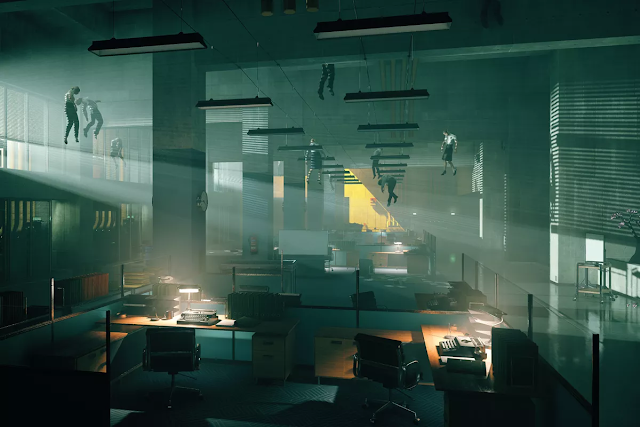 The main plot of Control is fairly straightforward, and exists largely to convey the myriad tiny stories contained within the Oldest House, spread across memos, recordings, films, and even office bulletin boards - stories about the haunted objects the Bureau is tasked with containing and studying ("Altered Items") and stories about the people who do so. You find bulletin boards where employees have put up flyers for a band a few of them have put together and for the Bureau book club, along with snarky responses to the omnipresent government safety posters. The crisis that Jesse Faden, your character, has to deal with as the Bureau's new Director (and also assistant janitor) was a sudden one, so even though we don't see most of the staff at work, we get an impression of them by what's been left behind: coffee cups, portable radios, self-replicating Post-It notes, and unfinished projects - mirroring the Altered Items as everyday objects intersecting with something otherwordly and the terrifying.

The Oldest House seems to have been created from the collective unconscious version of a federal office building of the 60s and 70s operating in the analog sphere of paper records, pneumatic tubes, and reel-to-reel recordings. While there's an in-universe explanation given (that modern technology reacts strangely around Altered Items and the Oldest House itself), it's an effective design decision that, along with other subtle touches like costume designs that are slightly off from their real-world counterparts, gives the player a constant sense of the uncanny, of a place that could almost exist - an alternate reality shaped like our own, but ultimately entirely different. But isn't that the case of every workplace?

A year into the COVID era, this may be the perfect time for a wider audience to discover Control, when many of us have been away from our regular places of work for longest period of our adult lives, giving us an opportunity to reflect on the sheer strangeness of in-person employment. The managed schedules. The dress codes. The patterns of speech and writing completely unlike those of the outside world. The persona you present to co-workers, and the one you have to show customers or clients. They're all present, to one degree of another, in nearly every job, and the shift between our off- and on-the-clock selves becomes so routine that, over time, we stop thinking about the difference at all - it may even be that, to keep ourselves sane, we have to keep it out of our heads, and it's only when the pattern is disrupted that it becomes visible. For my own part, as someone who usually has very little in common with co-workers, it's been a relief not having to come up with some vague answer to the weekly barrage of "how was your weekend" questions, knowing that my interlocutors  have no reference point for all my esoteric activities covered in this very blog. Feel free to insert your own circumstances as necessary.

I'm not saying that people should play Control because they miss the cognitive dissonance of a physical workplace, but rather that one experiences the way the game foregrounds this sensation even more acutely without the muddying factors of concurrent personal experience - it's easier for us to recognize that strangeness now than when we're always a few hours away from having to pretend it doesn't exist, but it hits all the harder by making us think how much time we've spent in that state. And, in the tradition of the best horror, Control establishes its space within that trepidation, making us fumble our way through. For instance, the game draws on the universal sense of Imposter Syndrome that dogs us whenever we have to do our jobs in front of others by immediately changing the portrait of the previous Director you see all over the Oldest House to a posed one of Jesse, the moment she's given the title. This photo is never taken, of course, it simply manifests itself on the walls, a stern image of the perfect professional you're expected to be. 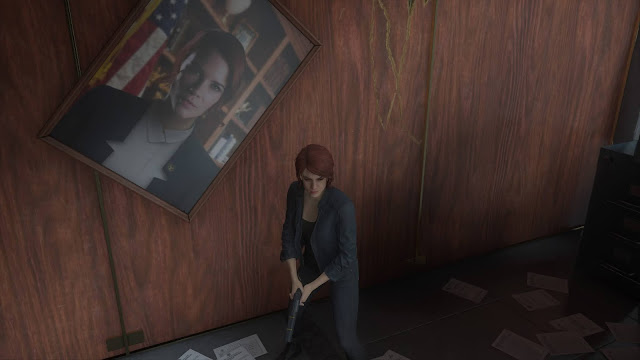 Control also explores the white collar/blue collar split through the aforementioned Janitorial Assistant role Jesse also takes on and the suggestion that head custodian/secret metalhead Ahti is the only one who really knows everything that goes on in the Oldest House - belying the way office workers often look down those doing manual labor while being completely reliant on their services... not to mention the fact that those same manual laborers are the ones seeing the most of what's going on in any workplace. The Janitorial missions give Jesse an opportunity to see the Bureau from a different perspective than that of the office workers, one of a bizarre and dangerous infrastructure they take for granted, but are an unavoidable reality for the people who keep it running. Again, the game builds on the wilful ignorance many have about the inner workings of the buildings around them, and presents them just as ugly and monstrous as the subconscious mind imagines them to be.

So much of this is thematic, subtle, and implied, but it all ultimately demonstrates the unique ways that electronic games can tell stories, allowing the audience to slow down and occupy the space being portrayed or, if they choose, move through it quickly and experience the setting as an aggregate. It's one of the things that excites me most about this medium, not only in the ways the interaction of game and player can create a new world to experience, but the way a player's memories and experiences can be reframed and seen in new ways. Control does this with an aspect of life most of us try to avoid thinking about, and in that, it succeeds remarkably. 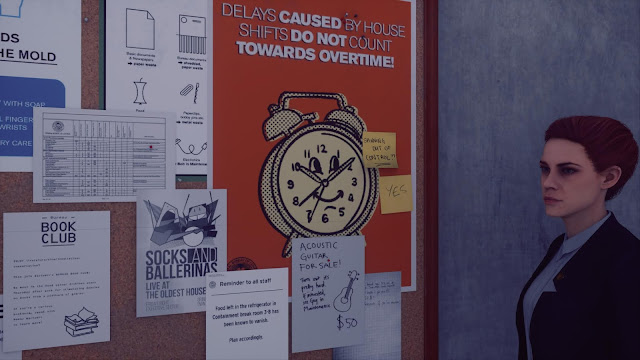