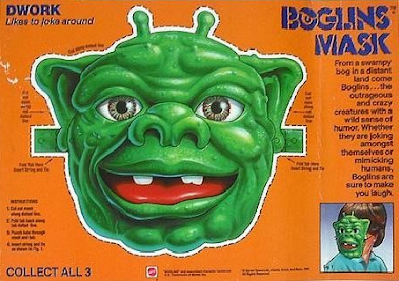 Last Octoberween, we took a campy nostalgic stroll and created some creatures for 5e Dungeons and Dragons (and a hidden Risus one) out of Blurp Balls. There was a significant amount of “family friendly” macabre-influenced media in the '80s and early '90s, as we mentioned previously. I do tend to revisit some of that media around this time o'year, and that might be a discussion for a later post. Like last year, I want to focus again on the "gross" toys that came out in the time period. Other than the Blurp balls, there were a few other horror-lite themed toys in my collection as a kid. Most, if not all, have likely been donated and hopefully found their way into the hands of some lucky kid instead of a landfill. I don’t think I ever owned any Madballs, but another toy that's held out in my mind are Boglins. So let's work again to see how we might transform an '80s toy into some tabletop RPG inspiration!

If you don’t remember them, Boglins were essentially gross-ish-looking legless goblins (gob-lin, bog-lin... I think we figured out some marketing representative’s process.) While they were pretty round, they weren’t of the "ball" toy variety - they were hand puppets! This shouldn’t be too surprising, since they were originally created by a handful of alumni of the Jim Henson Company. The Boglins had flexible rubber faces and appendages, a moveable jaw, and even plastic moveable eyes. If you had more patience than an average kid, you might actually be able to puppet them and have it look pretty cool! I never progressed that far, but I sure enjoyed my King Dwork when I had him. There were large Boglins (like the kings) smaller Boglins, the mini-Boglins of the 90s (think M.U.S.C.L.E men sized. I miss those too). If the honorific of King surprises you, know that there were apparently a number of Boglin tribes with their own attributes, seemingly led by King Droul, King Dwork and King Vlobb. How do we know this? From the Bogologist Field Notes that came on the back of each crate-like package! The most surprising thing about the Boglins weren’t the field notes, or the glow-in-the-dark eyes, or their tribes, but the fact that they didn’t have their own Saturday morning cartoon. 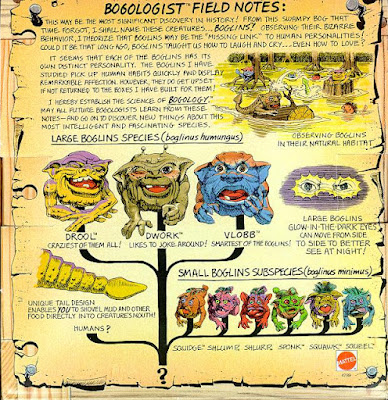 At this point in the post, we’d normally convert a few of these guys into creatures. While we could certainly do that, there are a significant number of different types and not nearly enough marketing backstory surrounding them. This especially becomes the case if you include the hundreds of mini-Boglin figure types that were created. For this post, I thought we'd go with a different route. How about Boglins as a playable race? While there are some sphere-like creatures in D&D (Beholders, gas spores, and modron come to mind), you don’t typically see those as PCs. While the books don't offer much about those specific creatures to inspire us, there are still a few things we can draw from. Good ideas can come from a number of things, but in this case, I’m going to steal borrow from Goblins (of course!): Kobolds, Kuo-Toa and your ordinary creatures like frogs and slugs.

We’ve already covered a bit of the Boglin description (legless round puppet things) and society (monarchies spawning from bogs), so we’ll just keep to the basic traits. For names, you’ll want something like: Drool, Dwork, Vlobb, Swoog, Sponk, Wort or Topor. For their basic stat scores we’ll probably want a Constitution penalty (due to the small size) but also a large Dexterity bonus. Age is a strange factor, varying wildly in our inspiration. I really don’t want to think about their reproductive habits, so let's give them a roughly human limit. Most of our inspirations seem bigger than I remember Boglins being, so let's give them an average of 1’ height, with a weight average of 15 lbs. Speed is another funny thing, but in this case I’ll say they're slower (again, being smaller) than our inspiration and say 20' per round, but, given their bog covered exterior, amphibiousness and taking no penalty for rough terrain. We’ll also give them dark vision due to their glowing eyes, and... one more special trait. Put all that together, and you get something like this:

Boglin names come from the sounds heard around their homelands: Drool, Dwork, Vlobb, Swoog, Sponk, Wort or Topor.
Ability Score increases:Your Dexterity score increases by 4, but your Constitution score decreases by 1.
Age: Boglins reach maturity within a few years, and live roughly as long as humans.
Size: Tiny
Speed: 20', and you have a swim speed of 30'. You have no penalty for rough terrain.
Darkvision: Your eyes have adapted to glow in the dark, you can see in dim light within 120' of you as if it were bright light, and in darkness as if it were dim light. You can’t discern color in darkness, only shades of gray.
Grease: You may excrete a slime trail when in danger once per short rest. Slick grease covers the ground in a 10-foot square centered on yourself, turning it into difficult terrain for 1 minute. When the grease appears, each creature standing in its area must succeed on a Dexterity saving throw or fall prone. A creature that enters the area or ends its turn there must also succeed on a Dexterity saving throw or fall prone.
Languages: You can speak, read and write Common and Boglin (of course!)

Now you have a whole new race to try out at your own tables! Something inspired by our childhoods you can either surprise your players with or enjoy yourself. If you wanted, you could even create your own monsters out of these, or NPCs if you’re not feeling the evil side of family=friendly horror. All this Boglin talk, and now I’m missing my old puppet companion. With theboglins.com still producing them, maybe I’ll see one of these in my household again. It can’t hurt that my wife's job includes puppetry, can it? Hopefully, you had some fun during this nostalgia trip and can bring some of it into your own games. If you decide to try this build out, please let us know how it goes on Twitter! Until next week, everyone, have a Happy Spooktober… now get out there and break some dice! 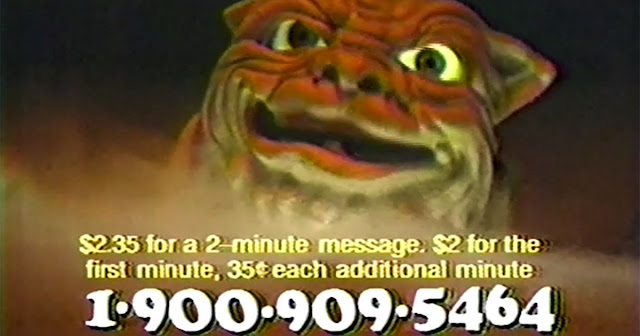 Back again, eh? I guess you figured you’d find another Risus extra down here like the Blurp Ball post. Well, you’re wrong!

Ok, I lied! Let's do a Risus version of King Dwork! He seems like a happy fellow, and is my favorite color, so with just basics, lets give him Beloved Boglin King (4) (it’s good to be the king!) He also apparently likes to joke around, according to the Bogologist Field Notes. We’ll use that for two: Practical Joker (2) and Potty Humorist (2) (no, really... for both of those!  Check his description on the site!) To finish him off, we’ll also give him Hand to Hand Combat Master (2) (he won the Supersilliest Scepter of Sanmarcan at the infamous Battle of Biv after all!) If you find a place for Dwork at your Risus games, please reach out and let usknow!