They Cajole, You Roll... Blurp Balls! 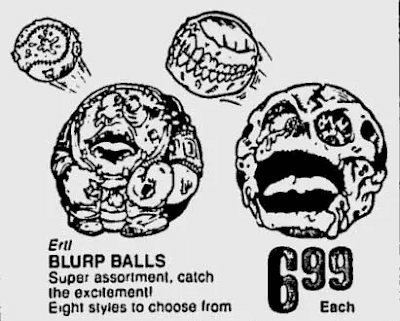 Horror, in the 80s and early 90s, often worked its macabre influence on the era's more “family friendly” media.  During thus time period, we saw the likes of Goosebumps (er mer gerd!), The Dark Crystal, and blockbuster movies like Ghostbusters. There are cult classics like Goonies (which helped inspire the name of this very blog) and Little Monsters with Fred Savage. The line blurred further when some movies were adapted to cartoons specifically for kids, like Beetlejuice and The Real Ghostbusters for example. With movies like Child’s Play inverting the forumla, it should be no surprise that this mash-up of horror and "kid thing” bled offscreen into toys, as well - many of which were childhood favorites. There were the Garbage Pail Kids, My Pet Monster and Mad Balls, just to name a few. And any of these would make a fantastic conversion into...you guessed it, tabletop RPG monsters! One of these toy lines that really stuck with me were Blurp Balls. So, for this Halloween-adjacent post, let's take a look at how we might include them in tabletop RPGs. 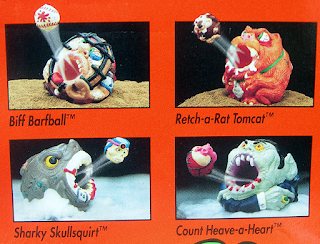 Horror's a genre I’ve never been particularly in love with, although I do appreciate its more comedic incarnations (or maybe just Bruce Campbell movies). When I was a kid though, I enjoyed a lot that was at least tinged with horror: Goonies, Ghostbusters, Goosebumps, Garbage Pail Kids... and that's just the Gs! This meant that I had a handful of horror-adjacent toys, and was lucky enough to have my very own Blurp Ball. Unfortunately for this post, it was Biff Barfball, and, while we could convert him into D&D stats, I think there are some better contenders in the line. Sharky Skullsquirt would only be good for water-themed games, Tyranosaurus Retch only works if we we're doing something dino-themed, and Count Heave-a-Heart doesn’t make much sense to me at all (although I do enjoy the wordplay). I don’t get the appeal of Retch-a-Rat Tomcat, so that leaves us with three great choices: Spittooey Sooey, Boney Tossteeth and Croaky Bugchuck. 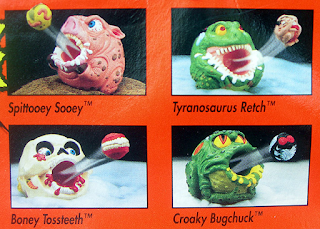 Spittooey Sooey would be a great place to start, and would fit in well with adventures for low-level characters as a quest from a beleaguered farmer. Infected pigs are wreaking havoc on the countryside, and the local farmers are worried about their other livestock and crops. We even have a D&D creature to build off of, the Boar. Starting from that, we’ll remove the Relentless feature as this pig is sick. It can keep the Tusk attack (or we could reflavor it as Bite) and it can keep Charger as well. We’ll change it to "monstrosity" type, as Spittooey certainly looks monstrous to me. That just leaves the spitting aspect. For that, we’ll edit the Poison Spray spell. As an attack, we’ll have Spittooey eject some gross rotten food at a target up to 10 feet away. On a hit, it would be a simple 1d6+1 damage, but the hit target must also make a Con saving throw or take 1d12 poison damage. Enter that all into your favorite monster maker (we're using GiffyGlyph’s here) and you get something like this:

For our second Blurp Ball battle, we’ll stat up Boney Tossteeth. Undead are a classic D&D monster type, so Boney should fit right in at the tabletop. Boney's all skull, so for a base we’ll use another famous D&D skull - the Flameskull. The Flameskull has significant spellcasting ability, though, so we’ll need to do some edits. For Boney’s main actions, we’ll give a normal Bite attack and a reskin of Chill Touch. Flameskulls can float, but that doesn’t seem right for this creature so let’s have Boney roll. Boney can keep the standard undead immunities and resistances, since that still makes sense, and I think it would be okay to let this skull keep the Flameskull's Magic Resistance and Rejuvenation, as well. As far as spell casting, I don’t think we want something quite as powerful as the Flameskull, so we’ll cut that back a bit - let's keep the Mage Hand and Shield spells, though. For the 2nd level spell, let's reskin Cloud of Daggers to Cloud of Bone. This would bring in Boney's "tossteeth" nature we see in the toy. Something about this little skull terrorizing people from the floor makes me chuckle. 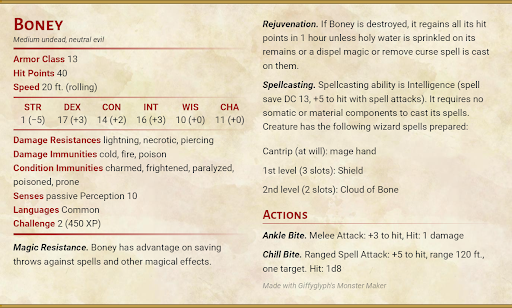 Not all of our conversions need to be monsters, nor do they need to be exactly like the toys we remember. We’re just using these memories for inspiration, after all.  For our third creation, we’ll take a look at Croaky Bugchuck. To bring Croaky into our game we’ll base him on a standard Giant Toad. This strange beast can even keep all the standard attacks and abilities. The one thing we’ll add is a custom ability: Summon Flies (a reskin and alteration of the similarly-named spell) Croaky has become big by developing an innate ability to summon a preferred food - files. Once per day, he can summon the swarm, and any creature caught up in it will take 2d10 worth of piercing damage while Croaky is eating. Croaky doesn’t need to be a menace, or even an ally, just something fun to flavor your games with. 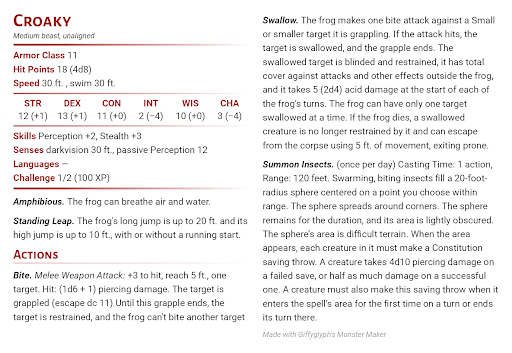 So there you have it, some great new monsters inspired by our childhoods to throw at your players. With a little work, a Blurp Ball Break or two, a solid official framework, and some power reskinning, you can get something and fun and effective. If you’re lucky, you’ll even evoke some fond memories for your players, as well. Feel free to use the creatures created here in your own games or make your own, even spookier, versions! Hopefully, you can find some inspiration in the toys of your own childhood to bring to the table, even if they aren’t horror-themed. If you do, please share them with us on Twitter. Until next week, everyone, have a Happy Halloween... now get out there and break some dice!

You’re still reading? Even after the “questions and comments” tag and final image? You deserve a reward... Biff Barfball, Risus style! Biff is obviously a former baseball player that some ooze gave creepy vomiting powers. It also looks like he may have been in a few fights, based on the swollen black eye behind his catcher’s mask. That gives us plenty to work with. He was a fighter when he played and he's a fighter now, so show us Barroom Brawler (4). For the second cliche, it's Ooze all the way - Projectile Vomit (3). He also has to have gotten that baseball in there somehow: Swallow Large Objects (2). Even as a kid, I got the feeling he wasn’t particularly good at the sport: Professional Baseball Catcher (1), and there you have it. I hope you enjoy him in your Risus games.
- A