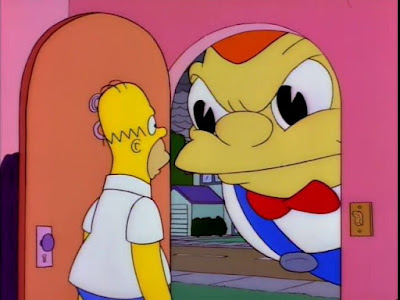 It's no secret that we at Never Say Dice have been... strongly influenced by The Simpsons over the years, as we've mentioned before. The two of us can (and have) hold entire conversations with nothing but classic Simpsons quotes, something that's probably not too uncommon for our generation. (And portrayed in Rebecca Sugar's heartbreaking short comic Don't Cry for Me, I'm Already Dead.) And, while we both drifted away from the current run of the series, we still enjoy reminiscing about the older episodes we grew up with. This time of year in particular always turns our thoughts to the "Treehouse of Horror" Halloween specials and their numerous inspirations. In particular, one segment that often crops up in our conversations is "Attack of the 50-Foot Eyesores" from Treehouse of Horror VI. While it may not be our favorite "Treehouse" segments (that would be "Time and Punishment" for me and "Dial Z for Zombies" for Bugsy), it's nonetheless one we particularly enjoy. If the writers of the Simpsons can borrow inspiration from Attack of the 50-Foot Woman and oversized advertising mascots, perhaps we can use "Eyesores" as inspiration for our own tabletop adventures and stories.

If you aren’t familiar with this segment, it opens with Homer having a... difference of opinions over the relative size of Lard Lad-brand donuts. Homer retaliates for his insufficiently-colossal donut by returning to the shop at night to steal the giant donut the held by"Lard Lad" mascot. Unfortunately, due to a freak electrical storm, the Lard Lad comes to life to hunt down his missing confection. Other giant advertisements come to life as well to help the Lard Lad terrorize Springfield including parodies of the Pep Boys and Mr. Peanut, as well as the Devil, the Duff Cowboy (no giant Duffman at this stage of the show) and others. To save the town, Homer eventually returns his treasure to the Lard Lad, but the giant donut only serves as another weapon for the Eyesores to terrorize Springfield with. But thanks to some help from Paul Anka, and a catchy jingle, the town eventually pulls together to Not Look and save the day. If only real advertising was that easy to take down.

How do we include this kind of storyline in our own spooky holiday tabletop narratives? With tabletop games, creating giant monsters is an easy enough task. In stories and games set in a fantasy world like Dungeons & Dragons, there are spells for animating objects and making things large, plus existing rules for huge creatures. It isn’t hard to envision borrowing stats from a giant to use in your own monstrous creation. Science fiction, of course, is rife with "things change size because of technology gone wrong" - the Honey, I Shrunk the Kids films, for example. And sci-fi is certainly no stranger to odd mutations, as well. It wouldn’t be too much of a stretch to see a Paranoia one-shot with the Troubleshooters taking on commie mutant traitors that have gotten out of control... and are also gigantic. It really doesn’t matter what system you end up using, if you poke around for a bit you’re bound to find a way to include giant versions of monsters. 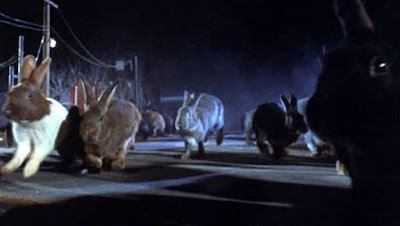 If these Eyesores are going to be the focus of your adventure/story for the evening, you’ll likely want a conclusion just as epic as your creatures are. It can be tempting to set up a simple solution where the enchanted crystal is destroyed, the settings on the cosmic ray are fixed, or the whole town chants “just don’t look!” These can all serve as your plan Bs for a quick-fix. Leave the possibilities open for your players on how to stop them. You can always drop hints along different avenues, but the story is going to be even better if the solution comes from them organically rather than being forced by the narrative.

Another thing you might consider is actually playing as the Eyesores. The power this can give a player, and the mayhem it would allow them to cause, can be very freeing and shake everyone out of their normal tabletop habits on both sides of the GM screen. If you take this route, there's a system called Monster Island: the Game of Giant Monster Combat that might be just what you are looking for. No, it isn’t just the Island of Dr. Moreau - this island is full of generic versions of your favorite giant combatants such as Godzilla and King Kong. Alternately, it could make for a unique game of Monsters and Other Childish Things. No matter where you take your giant monster battles, make sure each monster involved has their own special move or feature to make them feel different and unique. Otherwise, you might end up with some real monsters at the table.

While giant monsters may not be your typical favorite adventure theme, a quick one-shot featuring them can bring a well-needed vacation and offer some respite from normal gaming habits. It's almost certainly guaranteed* that the players will have a fun time and remember the session for quite a long while. Even if you’re focusing on your preferred system's already-giant creatures, these epic situations are just what Paul Anka ordered. Especially during the Spookiest Time of Year, the players will appreciate the effort. And if they don’t, at least you got to feel like a mad scientist for awhile. Until next time, readers, Just Don’t Look.