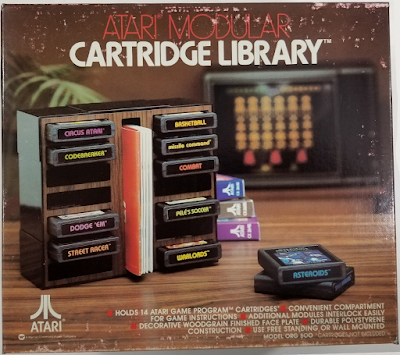 The term "backlog" has really grown in discussions about electronic gaming over the past few years, like... well, like a backlog (as many of us can attest). The pandemic, though, seems to have brought the subject to the forefront - I've certainly brought it up in here more than a few times. Starting around the summer of 2020, dozens of articles began to appear about how and why (or why not) one should go about "defeating" (or "tackling" or "taking on") their backlog. Interestingly, as above, the choice of verb is often a violent or confrontative one, suggesting that the games that once intrigued us enough to purchase have themselves become bosses to fight. Again, I am guilty of this myself, largely due to cultural osmosis, but recently I used the term "backlog journey," which is closer to how I really feel about the subject. I get to experience these games for the first time, I'm neither trying to achieve a high score in "lifetime games played," nor am I trying to "declutter" the games I've amassed - although I'd be lying if I said that neither of these were lurking somewhere in the shadows behind my motivations. It's certainly not from a desire to "get my money's worth," as nearly all of these games were purchased used (if physical) or during massive discount sales (for digital copies), and I'm sure this to be the case for many of my fellow "backlogged" - it's hard to feel guilty about a game impulse-bought during a Steam, PSN, or GOG sale when you paid less than you would for a half-decent sandwich. The ubiquity of these sales are a major reason backlogs are finally receiving notice: when games are on sale so often, no one can keep up with what they're buying, so we can assume that anyone who takes part in electronic gaming is just as susceptible to backloggery as we are. This has led to an interesting direction that's caught on in recent years: making our backlogs public.

Cataloguing software, of course, is nothing new. I remember stumbling across some very basic ones on the C64 as a kid. More specialized systems that linked to massive databases came along in time - the most successful being Goodreads, a model allowing for cataloguing books owned, books wanted, and, of course, the Backlog. For electronic games, many of these platforms seemed to be geared towards collectors, tracking which versions of a game were owned or sought after, but very little about actually playing those games. To be fair, one of the oldest gaming backlog sites, Backloggery predates a lot of these platforms, but it's closer to the older offline systems, where users entered every bit of data themselves without a media database to pull from - if you enter a game's name with a typo, it'll be there until you correct it (ask me how I know). Newer platforms, such as Grouvee and HowLongToBeat, pull their info from review sites, complete with cover art and release data. Each has their own niche, the former on aggregating user's game reviews and the latter on the games' lengths. Both are slick and corporate-looking, where Backloggery comes across as simple and home-grown. What all these have in common, though, is making user's lists publicly visible. This is largely the point, after all. While sites like Steam and PlayStation Network will let you see what games your friends have and are playing on those platforms specifically, backlog sites offer sortable consolidated lists, including offline and even vintage titles, viewable by friends or the general public, depending on your settings. So... why does such a thing exist, and why have these kinds of sites been proliferating in the COVID era? A cynic might suggest that it's primarily about bragging rights: showing off your progress to your friends and allowing for a competitive spirit, even with single-player games. I think, though, there's something more communal at work here, and this ties to my earlier thought about seeing backlogs not as challenges to overcome, but potential experiences to have. If you're reading this, and you can still remember the distant past when you went to other people's houses for parties or visits, you probably took a look at their collections of books. movies, and so on. It's okay, we all did it. They presented opportunities for conversation, for the exchange of ideas, and the kinds of engagement we nerdlier types prefer... maybe while other folks were gossiping in another about people we don't know. Now, though, those moments are lost, like tears in the rain. Sure, a bookcase may be visible during a zoom call, but we can't explore the breadth of our friends' collections. These cataloguing platforms, then, offer an experience we're otherwise missing - provided we spend the time to enter our libraries, of course. Some of the more advanced backlog sites will interface with online storefronts, but most of the entry still has to be done manually. This may not be to everyone's taste, but I find it rather relaxing. I'm something of an edge case, though: to deal with the horrific layout of the PlayStation store, I have been keeping a Google spreadsheet of all the games I own for years, so it's been largely a matter of copying titles into the backlog site. Even when entering by hand, though, there's a certain joy in seeing the list build up, and in being reminded of games I might not have thought of in a while.

Even the topic of what constitutes a backlog is ripe for discussion. At what point do we consider a game "finished," or, at least, done enough to be removed from the list? Are open-ended games' completion based on our own sense of satisfaction or on a achieving a high enough level of success? Do we include games acquired as part of a subscription, such as PlayStation Plus or contained within anthologies and collections? Games are complex in ways other media is not, and nebulous concepts of completion and even ownership will vary from person to person as much as definitions of narrative and play. Different platforms may be better suited to different approaches: Backloggery allows users to list games in anthologies as individual titles grouped under the main title, for instance, a feature the newer systems lack. I've already set up accounts for all three I've mentioned, and plan to use them in different ways best suited to their capabilities. For anyone seeking a less extravagant approach, it's still worth it try multiple platforms to see which best fits your needs.

And so, I humbly request the readers of Never Say Dice join us in building our Backlog Community. I want to see what people want to play! Games, after all, are what we're all here to talk about, and I live for the range and variety of what catches people's attention. It will be a long time until they're complte, but here are my Backloggery and HowLongToBeat profiles - may we all have the good fortune to share the experiences on our collective horizons.