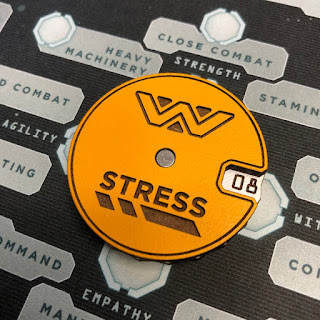 It's been a tough week, a tough month, a tough year... If your lives are anything like ours, things are a bit hectic right now. Whether it's climate anxiety, the "open everything up" push running smack into the Delta Variant, the conflicts and contradictions of school reopenings, or plain, everyday, run-of-the mill chaos, it all gets to you. This week, we thought we'd return to the topic how real-life stress intersects with gaming... and the stresses gaming can bring. - B

A: The fighter just went down and is starting to bleed out. The magic user appears to be out of spells and seems to be floundering on what to do next. The rogue? They're looking pretty rough, and without the fighter to play off of, they might be brown bread after the next assault.  The Big Bad Evil Guy looks like he may be on the ropes, though.... but maybe they're faking? What do you do? Should you rush to the fighter and dump your last healing spell on them? Perhaps you should launch a full attack on the Big Bad Evil Guy in hopes of taking them down. Your friends can always be patched up afterwards, right? Certainly, you can’t have the rogue go down swinging as well. Or is the Big Bad Evil Guy not actually as damaged as they seem, and it's time to consider options for escape? Maybe even cutting your losses and flat-out running? Stressful decisions like these might not come up in every gaming session, but they do happen from time to time in tabletop roleplaying games. Why do we put all these stresses on ourselves when games are supposed to be our escapes, and what can we do when all the stress seems overwhelming?

Games serve as stress relief for many of us. They might be of the tabletop variety or more digital in nature, but games are relaxing for a great deal of us, an escape into another world from our everyday lives and stressful events . Why do we trade one stress for another? Sometimes the escape itself is enough. You can play a bit and feel recharged when it's time to return to regular life. Games can bring in new stresses, though, and that could be when it's time to take a break. Your day-to-day life can be overwhelming enough without games, even before adding all the logistics required to set up play (just finding the time!), it can seem like an impossible task. It's okay to take those breaks, though. The video games will still be there. Your friends can wait another week or two to join you at the tabletop, whether it's virtual or physical. Other than that, try to make sure to let people know how you’re feeling. They can’t give you any help or extra consideration/allowances if they don’t know that you need them.

Bugsy, how do you deal with your gaming hobbies when stress seems to be at the forefront? 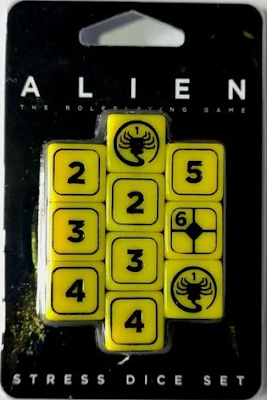 B: With gaming, and media in general, I generally prefer cathartic experiences more to escapist ones. Sometimes, what we really need is the new perspectives narrative provide, and when the themes of the story you're experiencing are consistent with what you're dealing with in real life, it helps prevent the nagging "should you really be doing this with your time?" voice in the back of your head. Having said that, while it was pure coincidence that three of the long-form electronic games I've played since the start of COVID all had plots involving epidemics, I appreciated seeing the different ways the crisis was addressed in each setting, even if that wasn't why I pulled these particular games off the shelf. Whether it was far more optimistic or painfully realistic, the distance allowed me to think about this real-life stress in a different way, and thus process it. Even the process of choosing which game I'll go with is part of my engagement with stress. Sometimes you want focused destruction, sometimes you want to feel like the kind of hero you wish really existed, and sometimes you just want something gentle and forgiving. If you're going to pursue electronic games as stress-relief, it's a good idea to make your choices when you're less stressed - that way you'll have them available when focus and decision-making are luxuries you can't afford.

At a table with other people, of course, is a very different story. Things have to be planned out to some degree, not least which game you're going to be playing! But it doesn't have to be rigid, and when you don't have the "spoons" (as the kids say) to be the driving force, it's okay to let the players direct progress. You can always save your ideas for another session. Andy's absolutely right about letting others know if you're going through a tough time, especially if you think this is going to be a more "responsive" free-form session. Don't worry about being embarrassed in front of your players - they've seen worse, trust me. ("Remember that time you...") And while it depends on your game, your players, and your campaign, a lighter session will go over better than a cancelled session. Having said that, there are times when you really can't run a game of any kind and know that things will go badly if you do. It's important to recognize when you're in that situation. It can still be worth it for everyone to still get together, though, provided you're capable of interaction, for a game-adjacent night that could be more about what people are liking, what they want to see more of, what might be fun to play in the future, or just plain non-game conversation. A tabletop session is a social activity, one that people often look forward to. Being able to provide the space for that, even if it's not for the planned activity, can help alleviate your stress of not being able to run a game, and their stress of not getting to play one.

The catharsis model I mentioned above applies to tabletop games as well, although less directly. Despite how it's often portrayed, roleplaying is never pure escapism - everything we bring to the table is still there, whether we're actively thinking about it or not. I've talked before about players enjoying Paranoia even more because of their real-life jobs. Not every game will get to map one-to-one in that way, but they can be thematically and emotionally linked to our lives away from the table. This can be positive or negative: things going well in the game can bring a sense of relief to someone having difficulties in the rest of their life, but things going badly can suddenly bring all the real-world tensions and frustrations to the forefront. Conversely, sometimes people need a tragic story to help them work through what they're experiencing in the larger world. This can all be very tricky, and you have to be aware of how your players are reacting to what's going on. It's always okay to pause and check in, or move away from heavier stuff for a while so you can talk to a player after a session. Everyone, players and GMs alike, brings their own baggage to the table, it's part of of being human. We all need to watch out for each other in the little worlds we build together, just as much as we do in that far bigger, far scarier world outside. 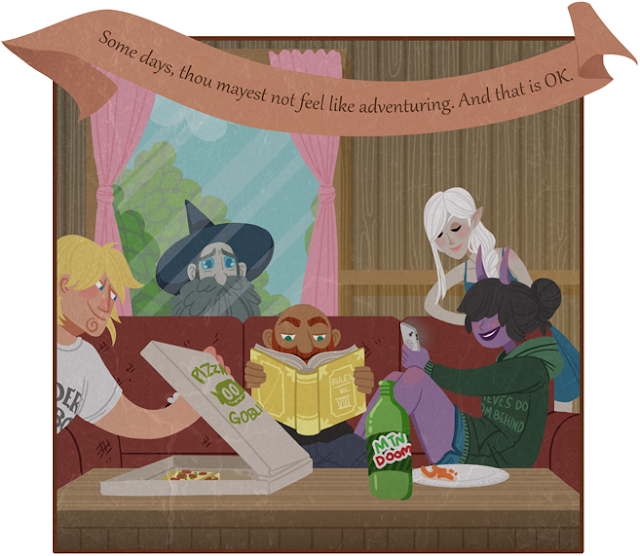 Art from Handbook of Heroes