No matter what (or who) we're engaging with, first impressions carry a lot of weight. But even before we've made them, we already have a set of expectations and preconceptions. These can be based on deliberate signifiers (this taxi is available because it's parked and the light is on), cultural preconceptions (I can talk to the driver, but they won't engage with anything I say in-depth), and underlying, unquestioned fundamentals of reality (the driver will appear human). This takes place in media as well, and largely defines the way we engage with genre works. When our actual experiences don't line up with expectations, we experience a sense of confusion as our brains struggle to catch up and make sense of what it's been presented, confusion that may (or may not) be proportional to the nature of the dissonance. If someone was familiar with anime conventions and the types of stories typically featured in anime, but not, say, the convoluted, darkly comedic crime films of Western directors like Guy Ritchie and the Coen Brothers, or the awkward, dangling conversational films of Jim Jarmusch, they might be just as surprised to see those kinds of stories in an anime as they would if that taxi driver turned out to be a walrus. 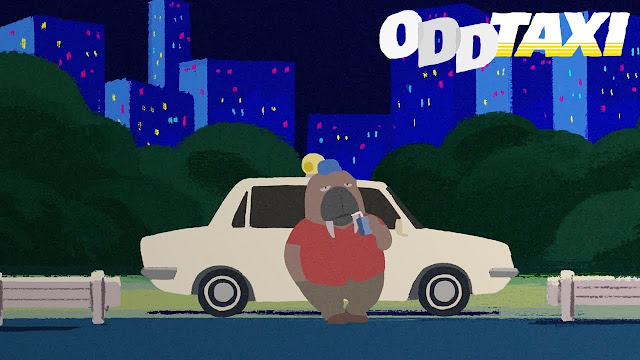 Odd Taxi, which completed its season on CrunchyRoll several weeks ago, is a series encapsulating all of these things. It is an anime, but differs greatly from most others in both structure and visual style. It's also a convoluted, darkly comedic crime story, influenced primarily by Western media. And it's about a taxi driver who engages with everything his riders say, in awkward, dangling conversations, frequently calling them out on their nonsense ... who happens to be a walrus. It's also one of the best things I've seen in years.

The series subverts expectations on all levels, in both the story and the way that it's told. None of the genres mentioned above, for instance, feature animal characters the way Odd Taxi does. The closest western comparison would be Bojack Horseman, although there are no human characters... except in flashbacks. (Aggretsuko may be the anime equivalent here, and now that Odd Taxi is done, maybe I'll finally check it out.) Besides the inherent tension between the look of the characters and their situations, the cartoony animal designs allow for a world of strange proportions and sizes harkening back to the camera tricky of film noir... but in a subtle, colorful way. And while the only television (as opposed to film) comparison my wife and I could think of was Fargo, a comparison between the two series' openings shows just how differently these kinds of stories can be presented. (Both shows have fantastic, if very different, music.)

As a protagonist, Odokawa (our erstwhile walrus cabbie) doesn't quite fit the mold of the main characters in dark comedy crime stories, either. He's an outsider pulled into a situation, probably closest to the Dude in The Big Lebowski, with his own moral sense distinct from both the (corrupt) law and the conniving underworld, generally knowing what the audience knows... but we're also given clues from the beginning that there are things we aren't being told about him, and aspects of both his past and his present remain murky. Aside from wanting to know what's going on and wanting to emerge unscathed, his exact motivations aren't clear from the beginning. All of which make him a fascinating character to stick with. Nor is he the only one, the series is full of examples of characters defined largely by what they want, which may be neither what the audience expects them to want or even what would be best (or even healthy) for the character. This is vital to this kind of storytelling, as the conflict emerges from what the characters do to get what they want and how they all act at cross-purposes to one another. 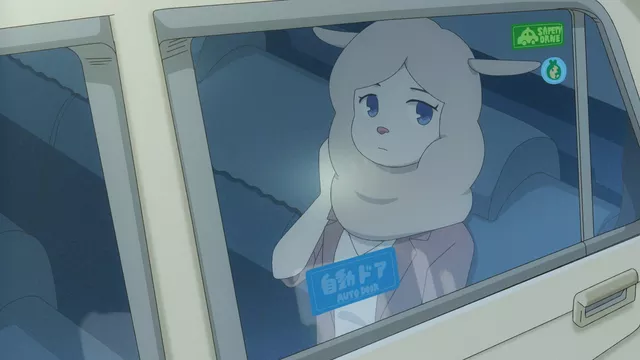 Here's where the genre's complexity becomes an interesting challenge to present outside the form of a motion picture. In a film, where runtime is fairly limited and the plot needs to move at a rapid clip, characters can be somewhat simplistic: who they are and what they want. (On paper, anyway. In practice, a good actor's performance can really provide depth to characters that might otherwise seem shallow and flat.) The longer runtime of television presents a challenge, since we'll be spending so much time with the cast. Fargo (the series), circumvents this by presenting a far larger cast of characters than a movie could accommodate, all with their own subplots to come crashing into each other. Thanks to its unusual format, Odd Taxi gets to combine the two approaches. There's a fairly large cast with competing desires, but they also get to be clear, simple, and, well... cartoony. Again, the conceit of animal characters works wonders here, conveying character aspects in a way that's all too rare in media made for adults. (But, given my adoration of Bojack Horseman and Achewood, would appear to be metaphorical catnip for yours truly.)

Bringing the competing character structure to the tabletop presents a unique challenge: in most games, people want their characters to do well, but dark comedy crime relies on things going very badly for anyone, and (maybe) a single character emerging intact... to one degree or another. So it makes sense that Fiasco, a system designed specifically for this, eschews much of the standard RPG requirements. There's no GM, for starters, every player is equally responsible for the story that develops over the course of the game. The entire system is centered around making crazy things happen, regardless of consequence, and reveling in the ensuing chaos. Obviously, this does present a distinct problem in that the players have to know about (and agree on) the kind of story being told. There isn't the consistency of an established world to latch onto, nor is there the central figure of a GM to ease a trepidatious new player into the action. In this way, Fiasco may seem to be the opposite of Odd Taxi's stealthy way of introducing a genre to an audience that may not be expecting it, but that doesn't mean a game needs to hew closely to established genre conventions. Once everyone has an idea of what they can get out of the game, players can start bending and subverting expectations in new ways (animal characters, for instance) and build something new and unique without having to secure studio backing.

Finally, one more way that Odd Taxi subverts its format is the way it moves beyond it. In addition to the show itself, there's an "audio drama" in the form of in-universe radio broadcasts that provide additional clues to what's going on, and present some mysteries of their own for the audience to solve. Thankfully, these have all been translated and are available on YouTube. There's one per episode of the show, meant to be heard after watching, and I highly recommend them if you, too, get bit by the Odd Taxi bug. If you enjoy the creators I mentioned earlier, have an interest in complex storytelling, or just want to see something different, and you can deal with subtitles, this is absolutely one to check out. I'd be very surprised if there wasn't a dubbed version in the works (if not available) by this time next year - I may have even started working out my dream voice cast. No matter when you get to it, though, it will certainly be one odd (and fun) ride. 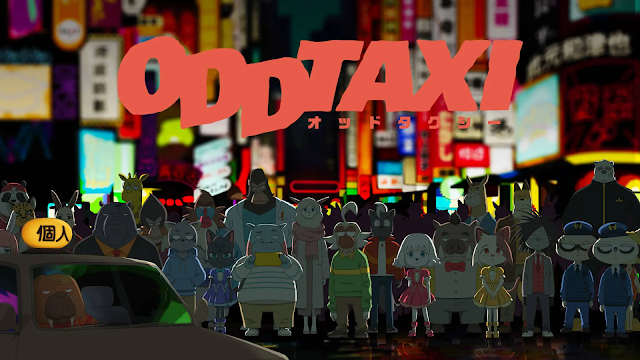