Style as Story in CounterSpy 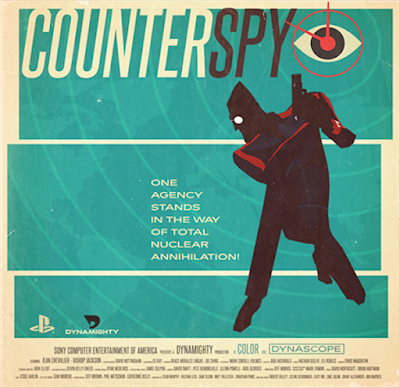 It's time to come clean: most of my recent electronic gaming selections have been inspired by genre discussion threads on the Something Awful forum, particularly explorations into the "Shoot 'em Up"(SHMUP) and JRPG genres. There are plenty of holes in my experiences with the medium, and I always love to hear people talk about why something does (or doesn't) work for them... especially when their suggestions are already part of my gargantuan game backlog. The most recent one, though, was for a genre I was more familiar with: "Stealth Games." Regular readers shouldn't be surprised here - given how often I bring it up, it should be obvious that my all-time favorite series is Metal Gear, which has defined much of the "stealth" genre. Not only those games, though, but also Tenchu, Hitman, Assassins Creed, and Dishonored, all of which I've discussed before as part of the "assassination game" sub-genre, and well as those that share Metal Gear's espionage focus such as Splinter Cell. All of these were mentioned in the thread, but seeing them listed out reminded me of another that hadn't been included: 2014's CounterSpy. If you haven't heard of it, you aren't the only one - appropriately enough for a game set in the past about people who live in the shadows, the game seems to have been largely lost to history... not to mention my own backlog, despite spending some time with it about five years ago. But after I suggested it be added the game list, the title has rattled around my brain until I finally downloaded it and, in the mood for something shorter after a replay of the first Yakuza game (there will be a post about the series someday... or maybe a graduate thesis) and as a break in the middle of Halloween Castlevania shenanigans (combined with reading the original Dracula in some lunatic idea of a post treating the games as an adaptation of the novel... probably the result of sleep deprivation), I finally fired CounterSpy back up... and, this time, I finished it! (On "normal" difficulty, anyway.) Which means, as the aforementioned regular readers will know, that we're going to talk about it!

CounterSpy is not, by any means, a plot-heavy game, landing more on the "high concept" side of things. In an alternate history of the Cold War, the United States Imperialists and the Soviet Union Socialists have both become fixated on the launching a nuclear strike on the moon as a show of strength. (One loading screen blurb points out that this was actually proposed at one point.) The player, as an agent of the non-affiliated clandestine organization C.O.U.N.T.E.R ("Covert Operation to Undermine Nuclear Threats and End Retaliation" must infiltrate bases of both sides and gather enough intel to prevent the launch. And... that's it, really. The player character is never named and you never see his face clearly. There are no clues about his past or life. This seems to have been a conscious decision: early concept art and the launch trailer give him generically chiseled, angular features and refer to him as "Agent 31." Removing the specifics and hiding his features (although you can kind of still see them if you press your face right against the screen) was, to me, absolutely the right decision, giving the game a unique visual in the middle of an extremely dedicated genre pastiche. 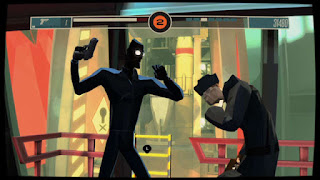 And what a pastiche it is! With art direction by the late Mark Cordell Holmes, who had previously worked on a number of Pixar films, the game looks like a heavily stylized movie poster come to life. Guard's torsos are massive, your spy's legs impossibly long, his head minuscule - the game makes so pretense to realism. Character design alone carries much of the story here, in similar to early arcade games. The soldiers are imposing, strong, and brutal, the spy quick, nimble, and vulnerable - all aspects that most stealth games character designs incorporate, but are limited in how much they can achieve without becoming cartoonish and silly, undermining their attempts (however successful) for a tense, serious tone. Of course, the same goes both ways: I can't see CounterSpy venturing beyond its own limited scope with cutscenes and dialogue. There are very few highly skilled comic artists capable of combining heavy stylization and heavy themes, but CounterSpy is far too streamlined, both literally and figuratively, to carry more than it gives us, content to be a short-form satire.

The game's environment shows the same sense of care - Holmes's CounterSpy gallery refers to signage as "visual storytelling," presenting over-the-top Cold War propaganda ("victory starts with being on the winning side," "the strong are never wrong" that could slot easily be slotted into Fallout or Paranoia: (Yes, it always comes back to Paranoia, but it, too, satirizes Cold War tropes.) The signs and posters that fill the missile bases are harsh and uniformly colored: red for the Socialists (of course) and blue for the Imperialists and a sharp contrast from the spy's slim black silhouette (again, the decision to darken the player character's face proves to be the correct one). The 2.5D layout leaves the backgrounds open for the profiles of massive missiles and warehouses while also allowing for the maps to be a simple arrangement of boxes - very much suggesting the layout of a comic strip. And, given that you always infiltrate bases on the left side and move towards the right, this seems quite intentional, adding to the pulpy feel.

Nearly every aspect of CounterSpy is a careful and loving tribute to genre classics, particularly the 60s series The Man from U.N.C.L.E. And here lies the risk of taking this approach - so much of the effect is based on the audience's familiarity (even through cultural osmosis) of genre tropes and signifiers. Would someone with zero awareness of espionage media get as much out of CounterSpy? Probably not, but the energy and imagery stand out well enough on their own that any player should be able to get something out if it. Other media relying on these kinds of references might not be so lucky - like the best pastiches of any medium, CounterSpy functions on its own as a good (if not particularly deep) game aside from the genre trappings. Which is the takeaway for all creators looking to follow a similar approach in their own works: style can definitely make up a lot of story, but we need to know, and account for, its limitations.